Creating a Django app with Uploadcare

Uploadcare is an end-to-end file API that allows you to fully manage file uploading, storage, transformations, and delivery. All that is included in our Python and Django integrations.

In this guide, we'll create an app with an Instagram-like grid feed and image uploading: 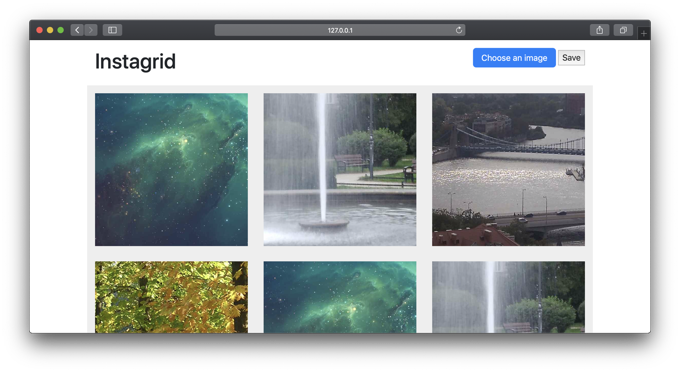 If you're using pyuploadcare with Django, check tox.ini or .github/workflows for supported Python-Django combinations.

Our Python library, pyuploadcare, consists of the Uploadcare API interface and a couple of Django goodies. Although it isn’t necessary to go with Django, we'll use it to build a sample project.

It’s a good practice to always use a per-project virtualenv when developing locally with Python. It's also a good way to get around the Python versions ambiguity. Generally, you create and activate a virtual environment this way:

If the commands worked out, your CLI prompt should change like this:

Now you can install Django and pyuploadcare:

Let’s start with creating the project:

After running these three commands, open http://127.0.0.1:8000 in your browser. You should already see the Django welcome screen: 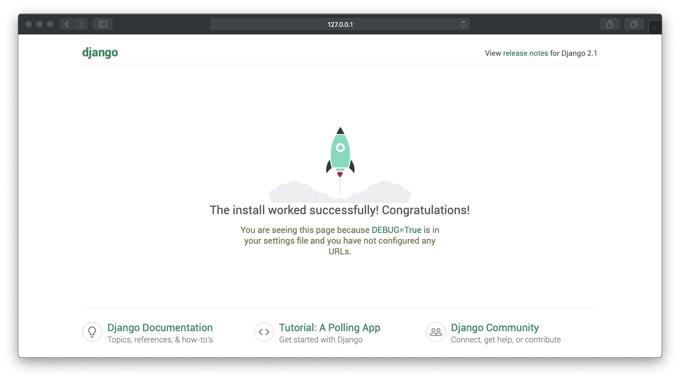 Now stop the server using Ctrl+C and run default Django migrations, which Django asks to apply every time you run the server:

Open the /instagrid/settings.py file and find the INSTALLED_APPS section. There, add lines for your app name and pyuploadcare:

This, among other things, allows Django to look for models.py in your app’s directory.

Also, in the same file, find the definition of DIRS in the TEMPLATES section. Here we will add the path to the templates directory:

The last thing related to this file is your Uploadcare config. Put the API keys you discovered earlier in this guide somewhere in the file like another settings variable:

Say, we would like to store the info about uploaded images in a database. Create a new file under /instagrid/ named models.py. Here’s the sample model we will put there:

ImageField is the pyuploadcare implementation of our File Uploader, which you can use as a regular Django’s TextField.

Make and apply our app migrations to create a DB structure for the new model:

Create a Template and a View

Now that we have done the groundwork for the app let’s make the app’s main page. It will serve as an image gallery and a place for the “Upload” button too.

We will not describe the process of building an HTML page. More tips on it you can easily find across the web.

Create the templates folder under your project’s main directory (it’s near the manage.py), and put your index.html file there.

Open index.html in your text editor, and note the following. The form.media here is a default Django form property which is going to render any scripts needed for the form to work, in our case – Uploadcare scripts:

The following is the Django way of displaying forms:

And here is the part that renders uploaded images, which data are stored in DB. We’re using some capabilities of our Image Transformations to crop an image and define its quality:

The last thing in this step is creating a view. Views help Django know what template should be displayed and what data should be passed there.

Create a new file named views.py under the /instagrid/ directory in your app. Put there the following code:

This code is just slightly different from any basic tutorial’s one. Here we define the home view, which saves the form data on POST request and passes all the objects stored in Post DB.

To make view show up on the site, you have to also change the /instagrid/urls.py like that:

We created a Post model in the first step and an index.html template together with the home view in the second. To make them work together, we need to implement the last component in our sample app – a form.

First, create the forms.py file under the /instagrid/ directory in your project.

The simplest way is to create a form from a model. Insert the following snippet into the newly created file:

You can read more about how these are built in Django Docs. One thing to note is the following line:

We set the label to an empty string to ensure that we won’t have labels in our form. Feel free to drop this argument if you like them 👍

Save all the edited files and run the server:

There’s more to it: you can handle API requests and Image Transformations, and enable the In-Browser Image Editing feature with pyuploadcare too. To continue your way with Uploadcare, take a look at these links: